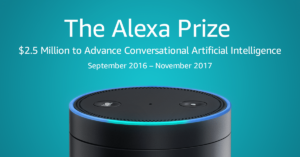 You may not be able to judge a book by it’s cover, but you certainly can judge a bot by its conversation! I recently had the pleasure of being one of the finalist judges for Amazon’s $2.5 million Alexa Prize. This inaugural competition focused on the grand challenge of building a socialbot that can converse coherently and engagingly with humans on popular topics for 20 minutes. That’s quite a challenge, especially given that most of us know probably some people who would have trouble meeting this challenge. While this is still early days, organizers said the teams had already made considerable progress in this first year. Many hope the challenge will be met in the next few years.

For this year’s competition, final announcements and awards were made at AWS re:Invent 2017, Amazon’s annual development conference held in Las Vegas. The winning team was Team Sounding Board, University of Washington, with an average score of 3.17 and average duration of 10 minutes and 22 seconds. The student team members will share in the $500,000 prize, with the other two teams, Team Alquist, Czech Technical University, Prague, Czech Republic and What’s Up Bot, Heriot Watt University, Edinburgh, Scotland, UK winning $100,000 and $50,000 respectively. All teams remained anonymous to the judges throughout the competition.

For me, it was extra exciting because this is such a key AI component in what will I anticipate will soon be the development of personal digital assistants. Not only that but it’s highly relevant to the new book I’m currently working on.

Clients and Podcasts and Forbes…Oh My! Richard and TED’s Excellent Adventure
We use cookies on our website to give you the most relevant experience by remembering your preferences and repeat visits. By clicking “Accept All”, you consent to the use of ALL the cookies. However, you may visit "Cookie Settings" to provide a controlled consent.
Cookie SettingsAccept All
Manage consent