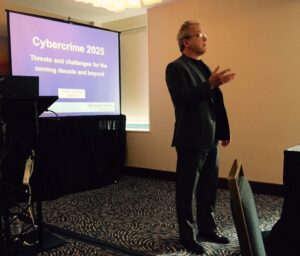 San Francisco was host to WorldFuture 2015 earlier this month. With around 700 attendees and professional futurists from all over the globe, it remains the world’s oldest and best known futures conference.

On Saturday, the conference’s first full day, I had the opportunity to give my session, “Cybercrime 2025 and Beyond” to a full house and it seemed very well received. I chose to take a little different tack with this talk and explored the development of cybercrime and the search for its solutions as part of the ongoing coevolution between humanity and technology. I ended with a call for building a biologically-inspired cyber-immune system that could protect not only our future digital assets, but potentially our physical infrastructure as well. While there is research being done in this area, there isn’t a focused program for bringing it to fruition. Yet.

Given the growing threat of cybercrime in recent years, it’s no surprise there were several speakers at the conference who addressed the subject. “Future Crimes” author, Marc Goodman opened the morning with an excellent talk that drew from the wide range of topics he covers in his new book. Later in the afternoon, Roey Tzezana, a nanotechnology scientist and futurist from the University of Tel Aviv spoke about his team’s cybercrime forecast model which looks at the threat profiles that are generated when different technologies are combined. Fascinating stuff.

Optocapacitance in Scientific American The Future Era of Space Mining
We use cookies on our website to give you the most relevant experience by remembering your preferences and repeat visits. By clicking “Accept All”, you consent to the use of ALL the cookies. However, you may visit "Cookie Settings" to provide a controlled consent.
Cookie SettingsAccept All
Manage consent