A New Definition of Intelligence 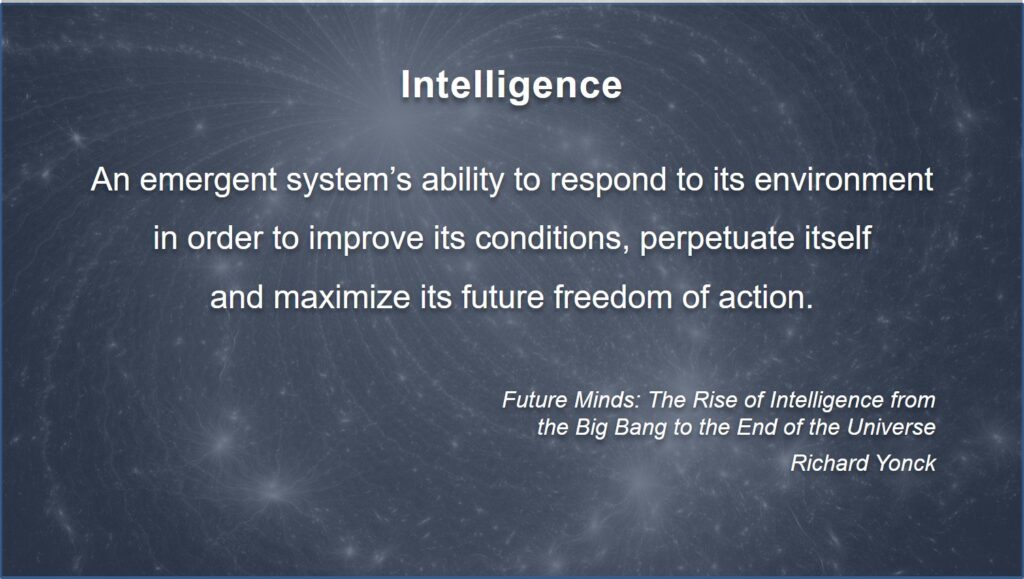 In writing my latest book, Future Minds: The Rise of Intelligence from the Big Bang to the End of the Universe, it was essential to properly define intelligence in an appropriate context. However, my research led me to over 200 different definitions of this nebulous word, most of which were overly restrictive or naively broad. This is due in large part to intelligence being what AI pioneer Marvin Minsky called a “suitcase word”, a term he used to describe words having many meanings and associations. In a 1998 interview with Edge, Minsky said of suitcase-words (like ‘intelligence’, ‘intuition’ or ‘consciousness’): “all of us use these to encapsulate our jumbled ideas about our minds. We use those words as suitcases in which to contain all sorts of mysteries that we can’t yet explain.”

Because of this and for reasons I expand on throughout my book, I finally arrived at a broad definition that encompasses the ideas I’d been exploring.

Intelligence: An emergent system’s ability to respond to its environment in order to improve its conditions, perpetuate itself and maximize its future freedom of action.”

This allows intelligence to be seen much more as an almost inherent property of the universe, something that isn’t limited to a single species or substrate, but which is an ongoing optimization in those systems that are able to successfully perpetuate themselves into the future. Based on this, while it may take considerable time, it seems likely that advanced technological intelligences will one day become a reality.

Parsons School of Design Guest Lecture Swearing Computers – AI’s Challenge of Toxic Degeneration
We use cookies on our website to give you the most relevant experience by remembering your preferences and repeat visits. By clicking “Accept All”, you consent to the use of ALL the cookies. However, you may visit "Cookie Settings" to provide a controlled consent.
Cookie SettingsAccept All
Manage consent